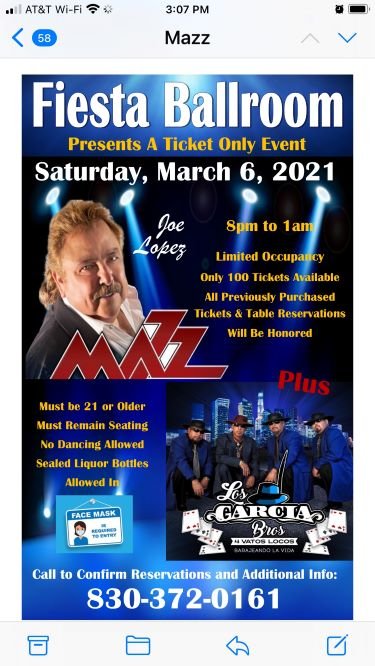 MARCH 6, 2021 -- All purchases are Nonrefunfable and Final

Mazz is a Tejano band originally from Brownsville, Texas. The band was known for their idiosyncratic and innovative form of Tejano cumbia which made them distinguishable among their counterparts. Mazz became one of the most popular Tejano music bands during the genre's 1990s golden age. Mazz won the Latin Grammy Award for Best Tejano Album in 2001, 2002, 2003, 2004, and in 2009, the most wins for a Tejano musician. They landed their first major recording contract with EMI Latin in the early 1990s, before switching to Freddie Records in 1999. Most Importantly, be kind and respectful to each other, we’re in this together! Please follow safety protocols: WEAR MASKS IN PUBLIC, WASH YOUR HANDS and SOCIAL DISTANCE—STAY 6 FEET APART. Due to the recent record number of COVID-19 cases, Governor Abbott has issued a new executive order declaration for the State of Texas, shutting down bars immediately, restaurants back to 50% occupancy and prohibiting gatherings of 100 people or more. Joe has announced a new rescheduled date for his show in Seguin. He is disappointed that he is unable to perform for you after waiting so long to see his fans. He is deeply saddened for everyone who is sick and has lost a loved one to this virus. His prayers are with all of you and your families. Please stay safe and healthy. All tickets and reservations will be honored. Your tickets just became more valuable, due to capacity restrictions, entry is limited to current ticket holders only. Joe’s Management Team, AGL Entertainment and Fiesta Ballroom thank you for your patience during this difficult and challenging time! God Bless and Protect Us All!